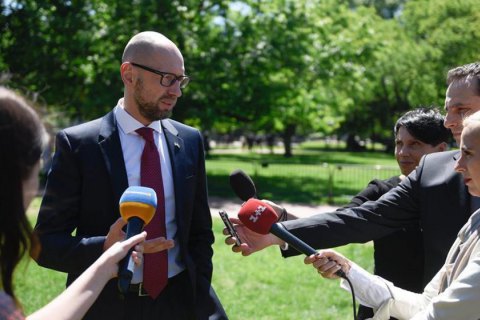 The leader of the Popular Front party Arseniy Yatsenyuk, who is on visit to Washington, on 16 May, with US President Barack Obama and US Vice-President of 2009-2017 Joseph Biden.

After the meeting, Yatsenyuk told a briefing that Obama and Biden "have done a lot to ensure that Ukraine has endured and survived, and had economic achievements, not just to keep Ukraine in the global focus, but prevent Russia from seizing Ukraine."

Yatsenyuk said his meetings focussed on the supply of defensive weapons for Ukraine: "I hope for the support of the US Congress and the position of the new US administration. Such a decision would send a clear signal that Ukraine remains a priority, that Ukraine is important for Europe and for the United States, that we are defending our independence and at the same time the borders of the EU and NATO member states."

He said he hoped the new administration would consider such a political decision.

The leader of the Popular Front he has discussed the continuation of the program for the modernization of the Ukrainian army that has started three years ago - the provision of equipment and training for Ukrainian servicemen.

"Both President Obama and Vice President Biden know very well what Ukraine is. And their position is the following: Ukrainian success is important for Ukraine, but it is also important for the whole world," he said.

"This is the appeal that I will try to convey to the American administration. We have proved that we can fight. But the struggle against the armed to the teeth of the Russian aggressor needs the support of the European Union and the United States," added Yatsenyuk.

During his visit to Washington, which began yesterday, Yatsenyuk held meetings with US presidential adviser on Europe and Russia Fiona Hill, US National Security Adviser Andrea Thompson, US Assistant Secretary of State for European and Eurasian Affairs John Heffern, Deputy Assistant Secretary of State Bridget Brink, and also spoke at the Heritage Foundation and the American Enterprise Institute.

Yatsenyuk is scheduled to meet with the leadership of the US Department of Defense, the International Monetary Fund and US senators.