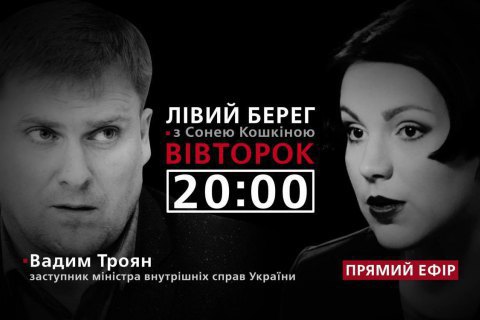 As deputy interior minister appointed in February, Vadym Troyan is coordinating the work of the National Police, the Border Guard Service and the interaction with Interpol.

Back in 2014, Troyan gave his first big interview to LB.ua as the chief of Kyiv police. When police reform took off, Troyan was a deputy head of the National Police and even served as temporary replacement for a while. He refused to run for the post, though, as he fell 20 months short of the necessary experience.

On the talk show Left Bank with Sonya Koshkina, Vadym Troyan will talk about the reform of the criminal police, how the police is combating crime; how the ministry is grappling with the 20% manpower shortage; and the most recent advancements in the case of the killed journalist Pavlo Sheremet.

After the program, do not miss the traditional rubric Postscript with Sonya Koshkina.

As of today and until the end of the current season, the talk show Left Bank with Sonya Koshkina will be aired at 20:00. Live as usual.