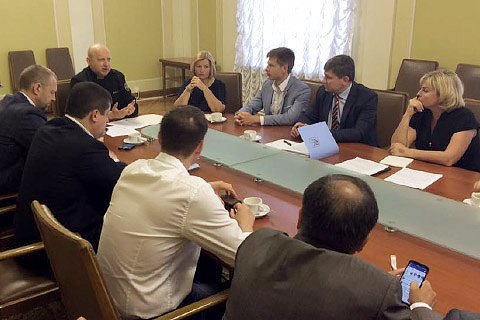 Ukraine's National Security and Defense Council will soon consider a bill on the de-occupation and reintegration of Donbas, First Vice Speaker Iryna Herashchenko said 19 June on Facebook. She said work on the draft law "On the peculiarities of the state policy for the restoration of Ukraine's state sovereignty over the temporarily occupied territory of Donetsk and Luhansk regions of Ukraine" has practically been completed and will be submitted to a meeting of the National Security and Defense Council.

"We have been working for several hours finalising some debatable aspects of the bill. An NSDC meeting slated to be held in the near future will consider the legislation and take a final decision on it. I have also suggested that the informal Minsk platform, which has been created and is successfully working in the Rada held a discussion on the bill shortly," Herashchenko wrote.

"On the instructions of the president, we are working on this project along with experts and the NSDC Secretariat. Important: Ukraine remains committed to the political and diplomatic way of settling the war in Donbas, that has been inspired by the Russian Federation, while we are fighting for the de-occupation and return of territories. This is the philosophy behind the bill," Herashchenko added.

The NSDC secretary Oleksandr Turchynov told the media said that Ukraine must complete the antiterrorist operation and move ahead to a new format of protecting the country from a hybrid war with Russia. According to him, the revised bill "of recovering the sovereignty of Ukraine on the temporarily occupied territory of Donetsk and Luhansk regions," will be presented to the president, after which he promptly gives it over to the parliament.