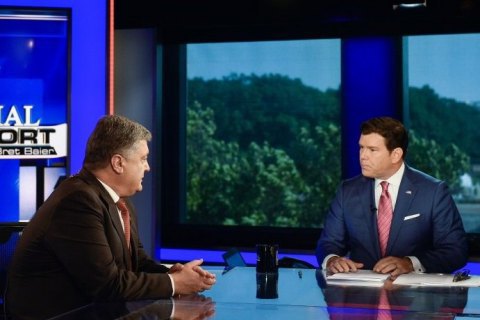 President Petro Poroshenko counts on the assistance of US President Donald Trump in the peace settlement in Donbas.

"This was my first meeting with the US president, and I saw a real leader," Poroshenko said in an interview with the Fox News channel.

He also noted that the Ukrainian delegation received convincing confirmation that the US supports the independence, sovereignty and territorial integrity of Ukraine, and our struggle for freedom and democracy.

"We are content with a comprehensive support of the U.S. demonstrated by President Trump and Vice President Pence," Poroshenko said as quoted by the presidential website.

The first two blocks of issues discussed concerned the peaceful settlement of the conflict in eastern Ukraine. In this regard, he recalled the events of three years ago, when a peace plan was proposed, which later became the basis of the Minsk agreements.

"I am absolutely confident that President Trump as a true charismatic leader can help bring peace to our land," Poroshenko stressed.

The second set of questions related to the implementation of reforms in Ukraine.

On Tuesday, Poroshenko met with Trump in the White House. The presidents discussed a number of issues, including economic and military-technical cooperation, as well as the security situation. Poroshenko also said that he had given Trump a letter from relatives of Ukrainian hostages in Donbas, Crimea and Russia.

Following the meeting, Trump assured the President of Ukraine of the support of the Minsk agreements.