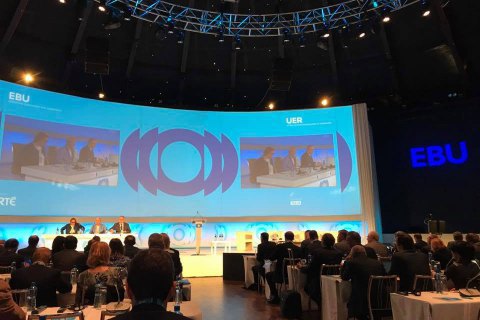 The organizers of the Eurovision Song Contest will fine Ukraine for barring the Russian entrant Yuliya Samoilova from entering the country, Reuters reported on 29 June with reference to the European Broadcasting Union (EBU).

The EBU said that Kyiv's actions had endangered the reputation of the contest. In addition, Kyiv will be fined for the delays in organizing the event.

The head of the Ukraine Public Broadcasting Company UA:PBC Zurab Alasania confirmed the organizers' intention to fine Ukraine for 200,000 euros.

"The morning started with not very pleasant news for the UA: PBC It looks like we are still in for sanctions for "the failure to ensure the participation of Russia's Samoilova in the Eurovision Song Contest 2017. I very much doubt whether the state in the person of the SBU will want to stand by the UA: PBC in this collision," he said in a comment.

Alazania said that the Russian Federation, according to some information, is preparing a separate lawsuit against UA: PBC "to strangle Ukraine's public broadcaster in the cradle."

In the run-up to the contest, Moscow opted to boycott the event after Ukraine barred its entrant because she had performed in Russia-annexed Crimea in 2015 and thus violated Ukrainian legislation.

The organizers invited Russia to arrange Samoilova's performance via a teleconference, or send another participant to the competition.

Moscow rejected both options and refused to broadcast the contest, and Samoilova decided to again perform in the occupied Crimea instead of Eurovision.

The head of Eurovision hailed the holding of the contest in Kyiv as "flawless".