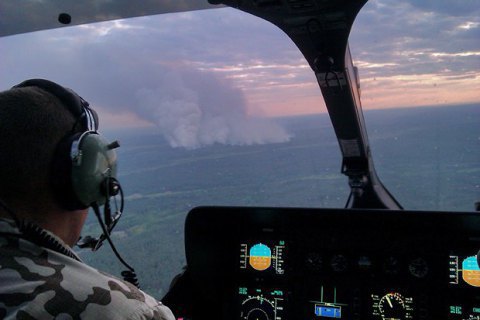 The area of the fire in the Chernobyl zone as of 11:00 on Friday is about 8 hectares, having decreased threefold overnight, the State Service for Emergencies said in a release on Friday.

Earlier, the Emergency Service reported that the area of fire was reduced to 12 hectares as of 8:30.

125 people and 36 units of equipment, including a MI-8 helicopter and two AN-32P aircraft, were involved in the firefighting operation.

The helicopter and planes made 23 sorties and dropped 100 cu. m of water onto the place of fire.

"The involvement of ground forces is hampered by an increase in the radiation background in the fire area," the report said.

There is no threat of fire spread, the report said.

The fire originated in the Lubyanske forestry in the exclusion zone during the technological deforestation for the railway construction at 12:35 am on 29 June. The fire promptly spread to an area of about 20 and then 25 hectares.

In the spring of 2015, a major forest fire occurred in the Chernobyl zone.

The fire in the exclusion zone possesses no threat to the nuclear power plant, the State Emergency Service said in a release on Thursday