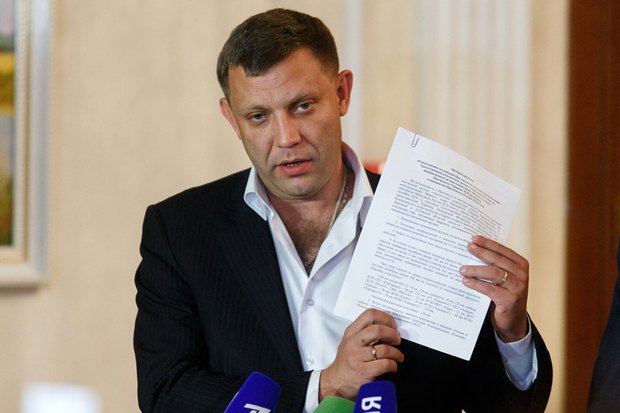 On 18 July, the leader of the self-proclaimed Donetsk people's republic (DPR), Oleksandr Zakharchenko, declared the establishment of a "transitional state, Malorossiya". Ukraine and the international community immediately condemned the militants' initiative, stating clearly: Russia and its "puppets" in Ukraine's Donbas are undermining the settlement process based on the Minsk agreements.

Having faced the unexpected resistance, especially on the eve of negotiations in Minsk, Moscow rushed to tame down the information "fire" the same morning. The first to react were political leaders of the Luhansk and Donetsk people's republics (LPR and DPR respectively) from Vladislav Surkov's team, who said the Malorossiya project has nothing in common with real politics.

"The Malorossiya establishment project was put forward by a number of writers and bloggers close to the DPR [the author of the quote is likely to be talking about a Russian writer and a political instructor of a militant unit in Donbas, Zakhar Prilepin – ed. note]. Many in the DPR leadership do not take it seriously. Therefore this project is rather literary than political. The Malorossiya initiative has nothing in common with real politics," said Aleksey Chesnakov, director of the Centre for Current Politics.

"There is much ado but everyone, including the authors of this idea, will forget about Malorossiya in a month," the expert concluded.

Especially so since the leadership of another quasi-formation, the LPR, immediately dismissed Zakharchenko's idea as "uncoordinated and untimely".

Then the issue was escalated to the state level: Russian presidential press secretary Dmitriy Peskov said Zakharchenko's move was his "own initiative" which the Kremlin had known nothing about until it was reported by the media.

And in a while, Russia's representative at the trilateral contact group on a Donbas settlement, Boris Gryzlov, said that the militant chieftain's statements on the establishment of Malorossiya "should not be regarded as a manifestation of real politics". What is more, he literally evaluated Zakharchenko's actions as harmful: "Most likely, this proposal has to do with the information war and is not a matter of real politics." 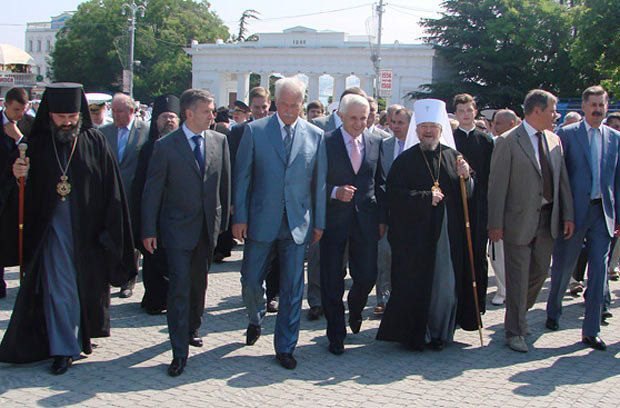 Thus, the Russian leadership spent the entire first half of 19 July calming down and persuading Western leaders that Moscow had nothing to do with the certain "hangover-ish" statement and is not withdrawing the Minsk talks.

However, by the evening on the same day, after a certain meeting held by "His Lowness" [or, if translated literally, "His Darkness", Surkov's nickname], Chesnakov gave a new interpretation of the Malorossiya initiative, albeit with different undertones. He said that the initiative put forward by Zakharchenko and his entourage is not that bad after all. Chesnakov made no secret of the fact that it is an element of the ongoing ideological war, and attempted (once again) to redirect the debate from Russia's armed aggression to the alleged "internal conflict in Ukraine".

"All this hype around a fantasy state Malorossiya is useful in general. What is important is that Donbas is fighting not to get detached from Ukraine but for its integrity. This means that in Ukraine there is a civil war between people who have different views on the future of their country," Surkov was quoted as saying by his spindoctor.

A two-day discussion of the militants' initiative to rename the LDPR Malorossiya has exposed a number of interesting aspects.

First, the fact that various representatives of the Russian authorities had not coordinated their statements confirms the existence of contradictions (or various approaches at least) between the different "Kremlin towers". How important is it to Ukraine? Absolutely not important: why would we care about different sorts of their bullshit? Ukrainians should only understand that Vladimir Putin is directly and personally to blame for what is happening in eastern Ukraine and in Crimea.

Second, the "planting" of the idea of Malorossiya is a hybrid trick in the real war: quoting Surkov, pundit Aleksey Chesnakov said that "any war has an element of an ideological war in which slogans and utopias are set against each other" therefore "it is Donetsk's turn with the idea of Malorossiya". Neither Ukraine nor the West, which set up multiple centres to counteract hybrid threats, are prepared to reach to this sort of attacks because, regretfully, they have not set up any real mechanisms of such counteraction. 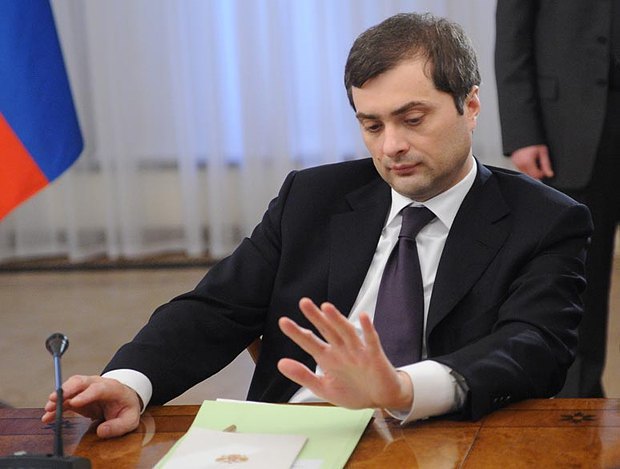 Third, the fact that international reaction went into orbit must have pleased local bandits and their handlers in Moscow: after all, Zakharchenko is no-one, he is a foreman in a non-existent "state". On the other hand, such reaction presented proof that the world is closely watching the developments in Ukraine and that the "Ukraine fatigue" is yet another myth employed by Russia in its ideological war.

Fourth, Crimea and the LDPR are a ground used not only to undermine Ukraine but to test and roll out various media and ideological strategies devised by certain groups of Russian politicians and officials to be later used in other areas of international politics.

Fifth, by managing the chaos they created in the occupied areas, the Russian handlers are mostly showing their importance and significance in the Russian system of power, which, in turn, ensures good food and luxury living for them, while they keep harassing the residents of occupied areas, the neighbouring state and the world as such.

Write one and carry two over

Based on the mentioned above, the following conclusions can be made. Militant-held areas will not be legally added to Russia (unlike the Crimea case). However, the Kremlin is not planning to return the occupied areas either. It will continue to try and shove the LDPR (possibly followed by Crimea) back in, but only if they are granted autonomy within Ukraine (let us recall the idea of federation or even confederation Moscow has long been pushing).

The incumbent Ukrainian authorities, as developments shows, have been putting up fierce resistance. Therefore Moscow will freeze the conflict (similarly to the case of Moldova's breakaway Dniester region) until better days.

In parallel, Moscow will be bringing these "better days" closer by pushing for a change of power in Ukraine, which should not necessarily be absolutely obedient or absolutely pro-Russian (like President Igor Dodon in Moldova), any other authorities which could undermine central government as such would suffice. It will seek to topple President Poroshenko, who does not agree with Putin, and his coalition, thus opening the door to changes in Ukraine's system of state. 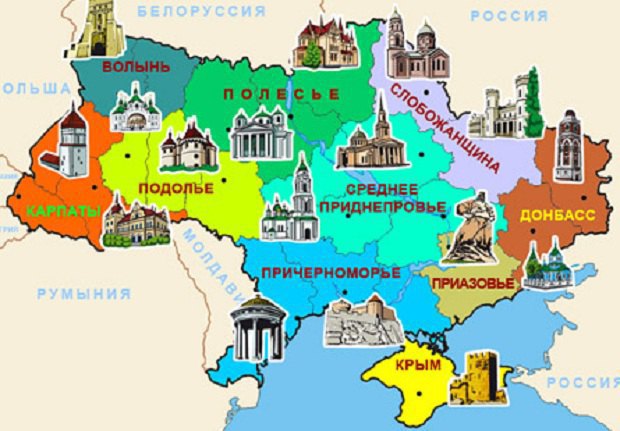 By the way, one of the latest confirmations of Moscow's future strategy on Ukraine can be found in Putin's speech at the Lebedin mining and dressing mill where he played into the hands of political opponents of the incumbent Ukrainian authorities.

In particular, Putin traditionally spoke about Ukrainians and Russians being "one nation" and that "there is almost no difference" except for "culture, language colouration". And that this nation is "too patient".

"How long will it go like this [current situation – ed.note]? I don't know. It depends on people who live there how long they are going to tolerate this," the Russian president dropped a hint.

And he even mapped the direction: "I really expect it to be over some day and this time without bloodshed, if there is God's will, in the course of democratic processes and restoration of our natural connections". So he is looking forward to the next presidential and parliamentary elections (first they hoped there will be snap polls, now they are expecting at least the regular ones).

What is more, Putin played into the hands of those Ukrainian political forces which resist reforms, in particular land reform.

"There are almost no other effective sectors already, except for agriculture. But if Ukrainian black soil goes on sale now, and if they let GMO products in, if they 'litter' – there is such a word – Ukrainian black soil, understand? This will be the end of it. Therefore the quicker we rebuild normal relations, manufacturing and economic ties, the better it will be for both Russia and Ukraine," he said.

He certainly kept mum about the land market which Russia has had for a long time now. Because where you sit defines how you think.