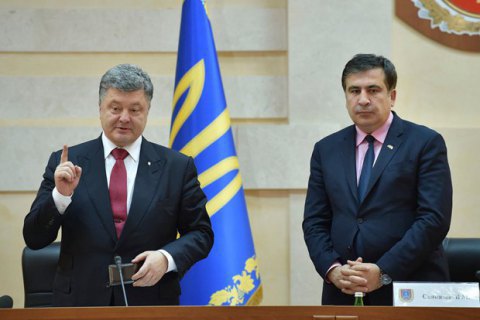 "This normative act is not subject to publication, since it contains confidential information, in particular personal data," the presidential press service explained.

The decision was made on the basis of Clause 2, Article 19 of the Law On Citizenship, namely - the indication of false data. The documents submitted Saakashvili said he was not under investigation in Ukraine or abroad, but it is known that Saakashvili a Georgian the ex-president in absentia.

Former Georgian President Mikheil Saakashvili received a Ukrainian passport at the end of May 2015 so that he could be appointed head of Odessa Regional State Administration in Ukraine. According to the Constitution of Georgia, a citizen of this country cannot have a passport of another state unless his Georgian citizenship is terminated.

The Ministry of Justice of Georgia initiated a procedure depriving Saakashvili of Georgian citizenship.

President Petro Poroshenko said during a 22 June press conference in Brussels that he did not know what Saakashvili was doing in Ukraine.