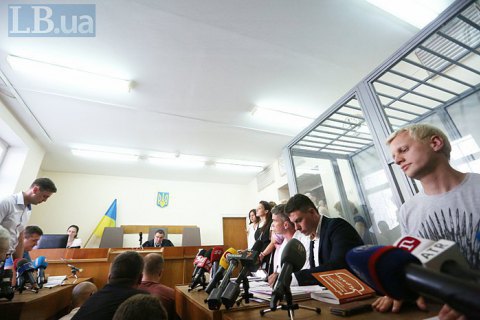 Kyiv's Dniprovskyy district court has released the head of the Anticorruption Centre, Vitaliy Shabunin, on his personal recognizance, effective until 14 October, LB.ua's correspondent has said. He is to inform the court if he changes residence or job.

He is suspected on inflicting injuries to Vsevolod Filimonenko, a controversial Luhansk-born vlogger, during a brawl that took place outside a district military recruitment office in Kyiv on 8 June.

On the video available online, Shabunin is seen punching Filimonenko after he asked him questions. Filimonenko insists Shabunin hurt him in response to the question on why he is not fighting in the east. According to Shabunin, he punched the vlogger because he brought Anticorruption Centre activist Oleksandr Ustynova to tears.

Shabunin's lawyers asked the court not to restrict their client. They pointed out that on the video he is seen punching the right side of Filimonenko's face whereas case files mention the left side.

On 16 August, Shabunin was officially declared a suspect under Article 122 Part 1 of the Criminal Code (deliberate infliction of medium-gravity injuries), under which he risked up to three years in prison. Over the night, the charges were changed to Article 345-1 (infliction of bodily injuries to a journalist during a legitimate professional activity).