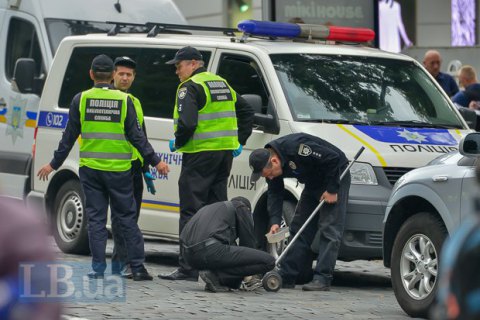 Three persons have been hurt by an explosion which rocked Kyiv's central Hrushevskyy Street at midday on 24 August, Ukraine's Independence Day.

Police are treating the case as an attempted murder.

The victims are relatives of Hero of Ukraine sniper Valeriy Chybineyev, according to 112 Ukraine TV. These are his wife, mother-in-law and friend.

"We have hospitalized two out of three victims, a man and a woman," a duty doctor at Kyiv clinic No 17 said.

The channel's correspondent quoted the doctor as saying off the record that Chybineyev's mother-in-law sustained shrapnel wounds.

As a member of the 1st aeromobile airborne battalion, Valeriy Chybineyev took part in the liberation of Lyman (formerly Krasnyy Lyman). In June 2014, his unit captured two separatist fighters. In July 2014, he and his fellow soldiers recovered three servicemen from a hit tank. In January 2015, he was among those defending Donetsk airport close to the runway. In July 2016, he was in charge of the operation which left 12 militants killed.