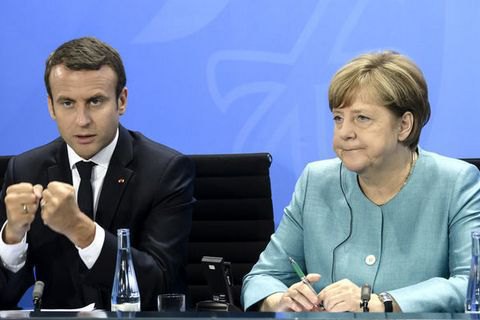 German Chancellor Angela Merkel and French President Emmanuel Macron have urged in a joint statement Ukrainian President Petro Poroshenko and Russian President Vladimir Putin to fully respect their commitments on ceasefire in eastern Ukraine. The German and French leaders said that following the last telephone call of the Normandy Four on 22 August, they are concerned that the security situation in eastern Ukraine has not significantly improved.

"In spite of the joint support of the four heads of state and government of the Normandy format - Chancellor Angela Merkel, President Emmanuel Macron, President Petro Poroshenko and Vladimir Putin – a new agreement on ceasefire signed by the trilateral contact group has not been fully implemented. There are still numerous violations of ceasefire, including with heavy weapons. The OSCE Monitoring Mission continues to report threats to its staff and restrictions on their freedom of movement, particularly in the areas not controlled by the Ukrainian government," the statement reads.

"We urge President Putin and President Poroshenko to fully respect their commitments, to support the ceasefire in a public and clear manner, and to ensure that appropriate instructions have been sent to the military and local forces," it goes on.

The German and French leaders also encouraged improved cooperation within the JCCC (Joint Centre for Control and Coordination) to address the ongoing engagements and call on all parties to provide safe and unimpeded access for the OSCE Monitoring Mission.

"We will continue to monitor the situation in the coming days," the statement concludes.