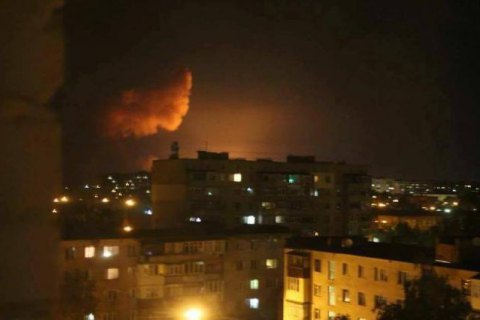 The Military Prosecutor's Office on 27 September opened criminal proceedings on the fact of sabotage in connection with the fire and explosions in the territory of a munitions depot the town of Kalynivka, Vinnytsya Region, the spokeswoman for the Security Service of Ukraine Olena Hitlyanska told Ukrainian News. At around 22:00 on 26 September, stocks of weapons and ammunition at a military ammunitions depot in Kalynivka have caught fire with the subsequent detonation of the ammunition.

Prime Minister Volodymyr Groysman stated that the fire was due to arson. Two women were reported wounded and hospitalized.

In March, a fire broke out on the territory of Ukraine's largest military warehouse in Balakliya, Kharkiv Region. The fire caused the detonation of 125- and 152-mm tank and artillery shells.

The military prosecutor's office established that the cause of the fire was sabotage. The Minister of Defence Stepan Poltorak said that the fire destroyed 70% of 138 thousand tons of ammunition stored at the depot.