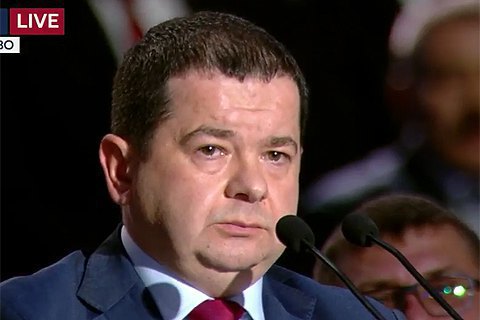 President Petro Poroshenko and Prime Minister Volodymyr Groysman gave a public scolding to the acting head of the State Service of Geodesy, Cartography and Cadaster Oleh Tsvyakh. "Mr. Tsvyakh, as of this moment you are suspended from office. Tomorrow I will turn to the prosecutor-general and the National Anti-Corruption Bureau and will ask to probe you and all your heads of district administrations," Groysman said at the meeting of Regional Development Council on Tuesday, 24 October.

The incident was triggered by complaint of a local official who said Derzgeokadastr has installed "watchers" in the regions. The audience greeted Groysman's words with a stormy ovation.

"'Watchers' has become history in 2013-14. If that is true, you are parasitizing on our country. There is no excuse for you. If you are guilty you will go to jail," Groysman said in presence of President Petro Poroshenko, who said that he fully supported the prime minister.

Oleh Tsvyah was appointed acting head of the State Service of Geodesy, Cartography and Cadaster in 2016.