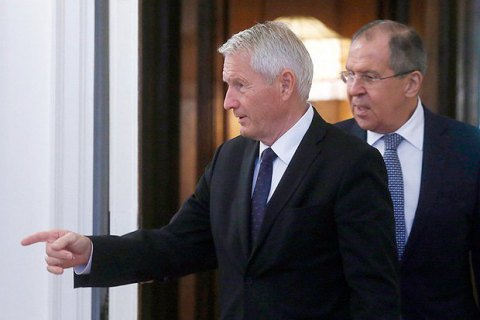 After the Moscow visit of the Council of Europe Secretary General Jagland, Russia decided on the basic algorithm of its return to the PACE, LB.ua learned from a diplomatic source.

"Following the visit of Jagland to Moscow an algorithm transpired of Russia's return to the PACE. The Russians got the invitation to come to the PACE session in January and submit their credentials for approval. It is expected that Ukraine will appeal these credentials, but will not garner enough votes in support during the voting. And that's how the Russians will triumphantly return to the PACE," reads the LB article "Trading in indulgences. The implications of Jagland's attempts to pull Moscow back in PACE?"

According to the article, this is still a basic scenario, and there will be more as the date of the session is getting closer.

The reason for Jagland's visit to Moscow was the Kremlin's threats to Moscow to stop paying contributions to the Council of Europe, which are estimated at 33mn euros a year.

"Moscow has found the Achilles' heel of the main pillar of European democracy - finance, and is methodically pressing this sore spot to promote own interests," the article says.

The interests of Russia are obvious. Firstly, Moscow wants to participate in the procedure of election of ECHR judges to influence their decisions on cases concerning the Russian Federation.

Secondly, the stakes for the return to the PACE are high.

Finally, the Kremlin and Volodymyr Putin desperately need a major victory on the international scene ahead of the presidential election in March, especially in Europe. "The return to the Council of Europe in terms will be seen as a 'crashing defeat of russophobes' plus will help silencing future criticism of 'elections without choice'," the LB article reads.