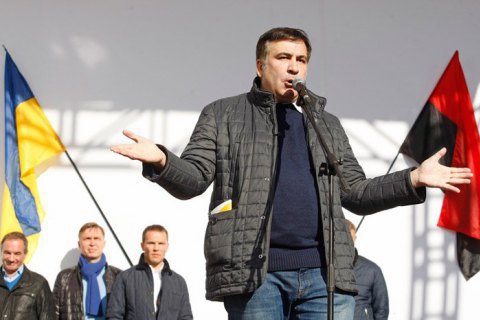 Speaking at a meeting of the Regional Development Council in Kyiv on Tuesday, 24 October, Lutsenko said that a narrow circle of 150 - 200 Saakashvili supporters, financed from abroad, are plotting a coup in Ukraine.

"The right to a peaceful protest does not mean preparations for a violent revolution," Lutsenko warned

"They pretend to be the only righteous and want to dictate to the state," the chief prosecutor said and alleged that the supporters of Saakashvili are financed from abroad.

"In due time I'll prove it," he promised.

Lutsenko claimed that that the inner circle of Saakashvili supporters is made up from Georgian citizens whom he has helped to naturalize in Ukraine.

"As head of the Odesa Regional State Administration, he had his subordinates issue permanent residence permits to a couple of dozens of Georgians," Lutsenko said.

The activities of this group, according to the prosecutor-general, are financed from a "charity fund, established by the clients of in Odesa customs."

"Armed with rifled weapons, they are bodyguarding Saakashvili and stay with him in the [rally] tent city, plotting a coup," the prosecutor-general said.

"Saakashvili, when the president of Georgia, adopted a Constitution that set forth the immunity of deputies including of their homes and cars. Here in Ukraine, he demands to abolish the immunity," he said.

"There are no open party lists in Georgia, but for some reason they need it here, because they will not pass through any majoritarian district, or on a party list. They use attractive packaging to dupe Ukrainians," Lutsenko went on.