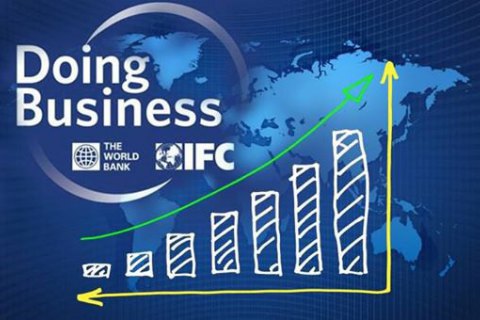 First Deputy Minister of Economic Development and Trade, Maksym Nefyodov believes that Ukraine could have been better in the Ease of Doing Business ranking.

Ukraine stepped four notches up from 80th to 76th place (among 190 countries) in the WB Group world ranking unveiled on 31 October.

"105 points up (from 140 to 35 place!) on the category "construction permits" was mainly thanks to reducing the equity construction in Kyiv from 10 to 2%, and a drop in the cost of quality control services; +41 point for "paying taxes" for the reduction and unification of the ERU rate; + 2 points for "connection to the electricity grid"; +1 point for the "settlement of insolvency", Nefyodov commented on the ranking figures on Facebook.

At the same time, the deputy minister believes that Ukraine could have jumped 10 places up.

"But they failed on other components, most of all by the "start of business," where the drop was 32 points, because competitors are also moving forward, so we have +4. It was relatively good, but there are almost no easy wins left. Real complex reforms must be implemented. For example, this year Uzbekistan implemented a full-fledged e-office of taxpayer while we are only talking about that. The bill # 6540 with respect to ease of doing business should be taken as soon as possible and it's time to pass the bill on bankruptcy and solvency restoration," Nefyodov concluded.

The Doing Business Report (DB) is a study elaborated by the World Bank Group since 2003 that is aimed to measure the costs to firms of business regulations in 190 countries. The study has become one of the flagship knowledge products of the World Bank Group in the field of private sector development, and is claimed to have motivated the design of several regulatory reforms in developing countries.