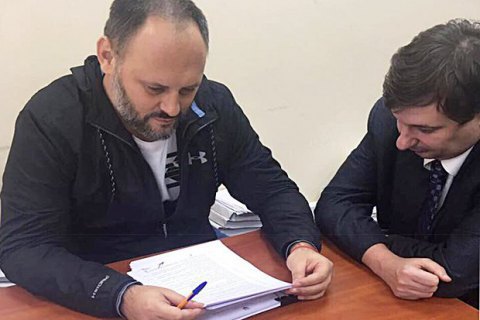 On the night of November 1, Panama extradited to Ukraine the former head of the State Agency for Investment and National Projects Vladyslav Kaskiv, Prosecutor-General Yuriy Lutsenko wrote on Facebook.

Kaskiv is suspected of misappropriation in 2012 in collusion with other persons of approximately 7.5 mn hryvnya in public funds.

He was taken to the Main Investigation Department of the Prosecutor-General's Office, Investigative actions are underway.

"This is the first, but not the last, case of extradition of a former Ukrainian official," wrote Lutsenko.

In the meantime Andriy Portnov, first deputy head of the Presidential Administration under Viktor Yanukovych, alleged in a Facebook posting that Kaskiv returned to Kyiv on his own will .

"Kaskiv few months ago in writing asked Panamanian authorities to be voluntarily extradited to Ukraine. He argued in Panamanian court that he had nothing to hide and eventually bought a plane ticket at their own expense. Yesterday, he freely moved around the Amsterdam airport and flew in to Kyiv at night, having previously informed Ukrainian investigators of his arrival," Portnov wrote. He also posted a photocopy of the Kaskiv's ticket.

On 18 August, 2016 Kaskiv was detained on the border of Costa Rica, where he wanted to go from Panama. Ukraine requested the authorities of Panama for his extradition.

Kaskiv from December 2010 to March 2014 was the chairman of the State Agency for Investment and National Projects of Ukraine. Police believes that the agency led by Kaskiv has embezzled several hundred million hryvnia, in particular 7.5 mn hryvnia on an advertising services contract.

In 2004, Kaskiv headed the civil campaign Pora, which actively participated in the Orange Revolution and later grew into a political party. Kaskiv was awarded a memorial sign "Outstanding member of the Orange Revolution" and for a year and was an adviser to President Viktor Yushchenko.

In the 2007 snap parliamentary elections Kaskiv passed to parliament on the list of "Our Ukraine – People's Self-Defence." In 2009-2010 he worked as an advisor to the Prime Minister Yulia Tymoshenko on foreign investment.