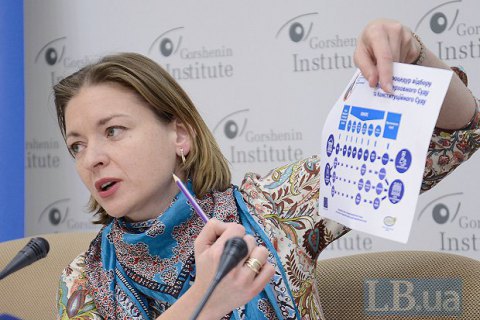 The Constitutional Court of Ukraine has not issued a single decision in a year, member of the board of the Reanimation Package of Reforms Yulia Kyrychenko told a 1 November roundtable conference organized by Gorshenin Institute and the RPR.

The expert in constitutional law says the deadlock is due to several reasons.

Firstly, the adoption of a new version of the law "On the Constitutional Court" has been delayed for almost a year.

Secondly, there is tough opposition between judge elected before and after the 2014 Maidan revolution.

"The Constitutional Court has 13 judges out of 18 and five vacancies. The CC works only in plenary mode as a decision needs the support of ten judges. Today, the court sees an epic showdown between the judges appointed before the Dignity Revolution, who, unfortunately, have executed political orders (the prosecutor's office is looking into the case), and five judges appointed after the revolution. They are principled people capable of withstanding political pressure that CC has to face under any rule. None of the parties have the majority," said Kyrychenko.

She noted that another five judges have to be appointed before the end of the year - one judge by the Congress of Judges, and two by parliament and the president each.

"Ultimately, decisions of the Constitutional Court will depend on these new judges. Either we get a majority rubberstamping, as before, politically motivated decisions, or a majority that would be capable of saying 'no' to the government," the expert in constitutional law said.

In the meantime, there are signs that the parliament is trying to fail the job contest in the Constitutional Court, she warned.

Kyrychenko reminded that a number of resonant laws are expecting review in the Constitutional Court, including the law on the national referendum adopted under Viktor Yanukovych, which has been awaiting a review for three years, laws on state language, lustration, etc.

The Constitutional Court is planned to elect the chair on 2 November.