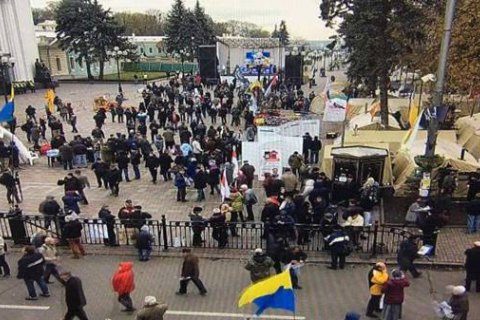 Interior Minister Arsen Avakov has ordered to withdraw police and National Guard from protection of public order in the tent camp outside the Verkhovna Rada. In a Twitter post on 31 October, Avakov wrote: "We shall no longer waste public resources away to protect the remains of that garbage outside the Rada. I have ordered to withdraw the шnterior ьinistry forces involved in perimeter protection."

Opposition have been rallying outside the parliament since 17 October, when the representatives of different political forces and public organizations, in particular Mikheil Saakashvili's Movement of New Forces, Fatherland, Self-Help, Citizenship, Demalliance, Freedom and National Corps installed tents. The rally demanded the abolition of parliamentary immunity, creation of an anti-corruption court and introduction of proportional electoral system on open party lists.

In response, the Verkhovna Rada sent bills on the abolition of parliamentary immunity to the Constitutional Court, but refused to review the electoral system. An updated bill on the anti-corruption court has not yet been submitted to the parliament.

On 19 October, most of the parties and public organization who took part in the rally said they would continue the protest by other methods, and left the tent camp. At the same time, Saakashvili's Movement and the supporters of Self-Help's MPs Yegor Sobolev and Semen Semenchenko decided to continue the rally.

Later, Saakashvili said that the tent city will probably be wrapped up after November 7.

As of 29 October, over 700 police and national guards protected public order at the rally.