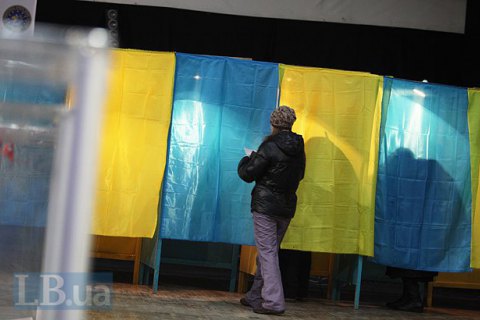 A group of unidentified people attacked and thrashed the polling station №120505 during 29 October local elections in the village of Maiske, Synelnykivs district, Dnipropetrovsk region. During the attack, two policemen were wounded, the press service of the regional police said on Monday, 30 October. "On October 29, 15 to 20 unknown persons stormed in, broke windows and damaged the property of the police station. After that attackers threw smoke bombs and left the village on seven cars. During the attack, two police officers who tried to prevent public disorder were wounded," the statement said.

One policeman suffered an axe blow in the leg. The nature of the injuries of another policeman is not specified.

The police intercepted cars with the attackers, who have changed the licensing plates by that time. During the inspection of vehicles, police found firearms and traumatic weapons (Kalashnikov assault rifles, rifles, pump shotguns), ammunition, bulletproof vests, balaclavas, iron pipes and baseball bates.

The suspects were arrested and taken to Synelnikove police station, police said. Their actions are qualified as an impediment of the exercise of the right to vote). For this crime, the attackers may face imprisonment for a term of seven to 12 years.

The OPORA civil network, meanwhile, said in a statement that they have not recorded any significant violations that could affect the final results of local elections.