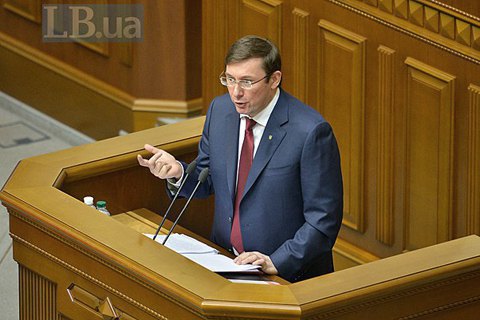 Prosecutor-General Yuriy Lutsenko will participate in a meeting of parliament's committee on national security and defence on 17 January, his press secretary Larysa Sarhan said Monday.

Lutsenko will report on the special confiscation of funds owned by former President Viktor Yanukovych and his entourage.

The head of the committee, Serhiy Pashynskyy, said at the agenda-setting meeting in parliament on Monday that Lutsenko should say "how much has been seized, from whom, and what is being done to seize even more".

On 10 January 2018, Al Jazeera published a 95-page text of the decision of the Kramatorsk district court on special confiscation, dated 28 March 2017, which was classified as containing state secrets.

A number of observers suggested that if the authenticity of the document is confirmed, this will offer an opportunity to legal entities whose assets have been confiscated to appeal the verdict in international courts.