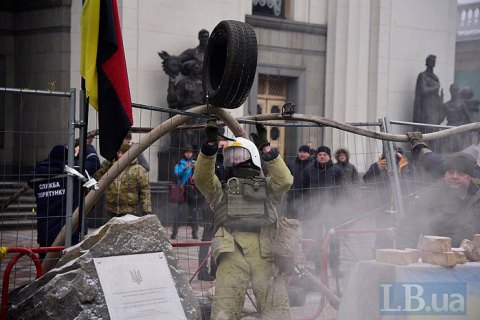 One law enforcer was injured in a brawl with protesters outside the Ukrainian parliament in Kyiv, the city police press service said on Facebook on Tuesday. A crowd gathered outside parliament while MPs were hearing the controversial bill on the reintegration of Donbas.

At around 11 a.m., protesters rallying in front of parliament set fire to several car tyres. When the police rushed to stop this and firefighters extinguished the fire, the protesters used tear gas and hurled pieces of cobblestone, car tires and other things at police.

One participant in the rally was held by the police.

Tight security measures are being taken on the first plenary day of the parliament session after the New Year's break.

Previously, nationalist groups held a march under the motto "Stop Revenge" in central Kyiv, demanding the adoption of the bill on Donbas.