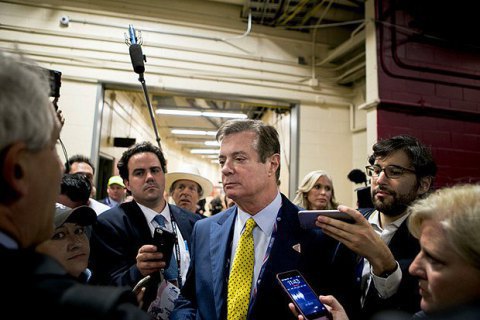 The former head of the Trump campaign, political technologist and an ex-adviser of Yanukovych, Paul Manafort, had his own people in every ministry in Ukraine, according to an investigative article by The Atlantic journalist Frank Foer.

The article that will be published in the March 2018 issue reveals some previously unknown facts from the biography of the American political strategist.

Foer notes that Manafort he’d developed a highly personal relationship with Yanukovych. They often played tennis and visited the bathhouse. Manafortt got Yanukovych to wear the same suits as he did and even to comb his hair back in the same manner.

"Manafort 'taught him how to smile and how to do small talk', and he did all this quietly, "from the back seat. He did it very elegantly," Foer wrote quoting Anders Åslund, a Ukrainian government economic policy adviser.

The journalist notes that Manafort has deeply penetrated the Ukrainian political system. "Paul had a whole separate shadow government structure… In every ministry, he has a guy," Åslund told Foer.

The former speaker of the Ukrainian Foreign Ministry, Oleh Voloshyn, told him that Yanukovych listened only to Manafort, while Ukrainian officials' arguments were ignored.

Manafort received from Yanukovych huge sums of money – more than ever before in his life, Foer wrote. The services of the spin doctor were often, albeit reluctantly, paid from the pockets of Ukrainian oligarchs loyal to Yanukovych.

After the Revolution of Dignity and return to the United States, Manafort suffered a massive emotional breakdown because of personal problems and was admitted to a neurological clinic in Arizona. One of his daughters said her father was on the verge of suicide.

Last December, a court banned Manafort from communicating with the media after Manafort tried to publish an article in his own defense in Kyiv Post. The article was authored by Oleh Voloshin, the spokesman of Ukrainian foreign ministry during the presidency of Yanukovych.