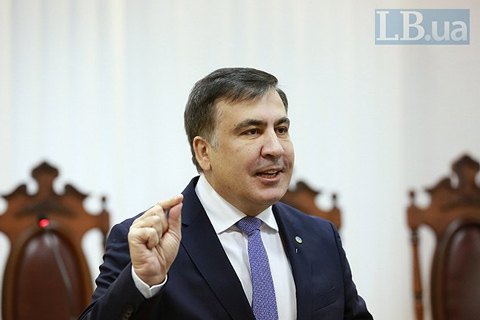 A cassation court of Ukraine's Supreme Court on Monday, 29 January, started consideration of the legality of the decree of President Petro Poroshenko terminating the Ukrainian citizenship of the former president of Georgia, the leader of the Movement of New Forces party, Mikheil Saakashvili.

Before the session, Saakashvili told journalists that he intends to hold a march for the impeachment of President Petro Poroshenko on Sunday, 4 February.

An hour later the court chair Raissa Khanova and adjourned the consideration until 16 February. At the same time, the judge asked the parties not to delay the process and reminded that the court's decision on the case should be announced before 3 March.

Saakashvili received a Ukrainian passport in late May 2015, so that he could be appointed head of the Odesa Regional State Administration. According to Georgian constitution, a citizen of Georgia cannot simultaneously hold citizenship of another country, so the Georgian Ministry of Justice in October 2015 started the procedure for depriving Saakashvili of citizenship.

In November 2016, Saakashvili resigned from the post of Odessa governor. In the summer of 2017 Poroshenko terminated Saakashvili Ukrainian citizenship citing inaccuracies in the information provided during the registration of citizenship. Saakashvili at the time was in the US.

In early September of 2017, Saakashvili illegally crossed the border of Ukraine with the support of his followers and soon turned to the State Migration Service with a request to be granted the status of a person in need of additional protection.

On October 24 the Migration Service denied him refugee status.

On October 29, at a rally near the Verkhovna Rada, Saakashvili stated that he had challenged presidential decree on the termination of his Ukrainian citizenship.

On January 26, Kyiv's Appeals Court partially granted a Prosecutor General's Office request by ordering that former Georgian president and leader of the Movement of New Forces be placed under night house arrest.