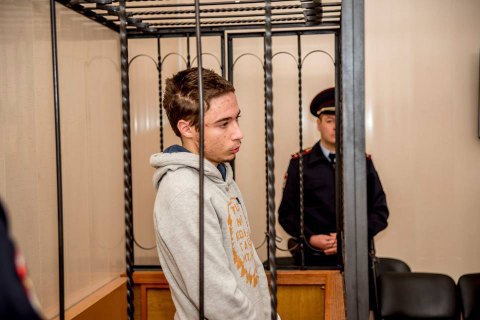 The father of 19-year-old Ukrainian national Pavlo Hryb, who was in August 2017 abducted from Belarus by the Russian security services and illegally arrested in the Russian Federation, has voiced serious concerns over his son's health.

"Today, on 1 February, in violation of all the deadlines, the Krasnodar regional court held a hearing to consider the appeal against the measure of restraint imposed on Pavlo. The lawyer learned about the court hearing by chance, just a day before it was scheduled," ex-border guard Ihor Hryb said on Facebook.

"Everything was done so that the parents did not make it to the hearing in time," Hryb said. "According to the lawyer, Pavlo looks very gaunt, has constant complaints about stomach and abdominal pain. He is in a generally depressed condition as a result of increased psychological pressure on the part of investigators and the remand centre's administration. There are no medications, no diet. He may suffer an internal bleeding at any moment," the father added.

Pavlo Hryb disappeared on 24 August when he went to the Belarusian city of Homyel, where he was to meet his Internet acquaintance from Russia. However, according to his father, a former border guard, now a military chaplain Ihor, the young man disappeared immediately after crossing the Belarusian border.

Ihor Hryb went to Belarus and was told by local police that Pavlo Hryb was internationally wanted on suspicion of terrorist activities. He was sought by the FSB of Russia. Later it became known that Pavlo was arrested in Krasnodar until 17 October. Later, the term of the arrest was extended until 4 January 2018. The FSB charged him with plotting a terror attack on a Russian school.

Pavlo's relatives insist he requires due medical care as he has problems with blood circulation due to the syndrome of portal hypertension.