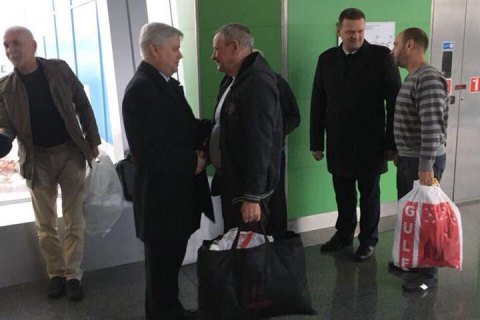 Ukrainian President Petro Poroshenko has welcomed the return of four Ukrainians who spent years in captivity in Libya.

"I am pleased with the return to our native land of four of our citizens after many years of captivity in Libya. I am grateful to diplomats and foreign intelligence for four more rescued Ukrainians!" Poroshenko said on Facebook and posted a photo of the Ukrainians who arrived home.

The Ukrainian Foreign Ministry reported later that on 2 February, through joint efforts of Ukrainian diplomats and the Foreign Intelligence Service, Ukraine had managed to bring home four Ukrainian citizens "who had been held in Libya for more than six years."

"The Ukrainian Foreign Ministry once again calls on citizens of Ukraine to refrain from visiting Libya due to the difficult political situation and security situation in the country, and the inability to provide proper consular and legal assistance on its territory, and those who continue to stay there should leave the country," the ministry said.

Early on Friday, Belarusian media reported the liberation in Libya and the return to the country of military specialist from Belarus Vyacheslav Kachura, who was detained by rebels in 2011.

Kachura arrived in Libya in June 2011 as part of a group of international specialists from Russia, Ukraine and Belarus. In August 2011, they were detained by rebels and charged with cooperation with the regime of Muammar Gaddafi. Later, some of the detainees were released.

A Ukrainian doctor who worked under a private contract in the city of Sabha and was abducted earlier by a numerous armed group was released on 13 January 2018, the Ukrainian Foreign Ministry reported. The doctor was released due to agreements reached by Ukrainian diplomats during talks with the leadership of local tribes.