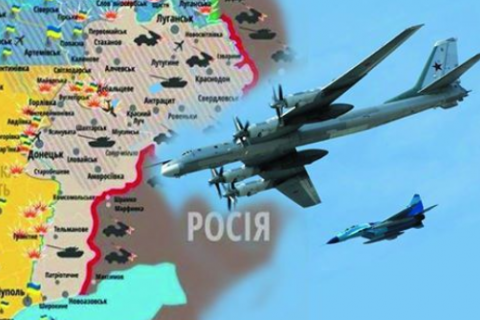 During an exercise of Ukrainian aviation, Russian aircraft took off from their airfields and approached the eastern border of Ukraine as soon as possible and imitated cruise missile launches, the Ukrainian Air Force Command has said.

"A group of Russian strategic bombers and missile platforms Tu-95, accompanied by a pair of Su-30 fighters, flew across the Crimean airspace and practiced cruise missile launches in the direction of mainland Ukraine," the command said on Facebook.

During the Ukrainian Armed Forces' air defence exercise on 15 February, the Air Force registered the stepping-up of activity by the Russian Aerospace Forces along the eastern air border of Ukraine.

"The aggressor country's fighters and bombers took off from the airfields in Kursk, Millerovo, Gvardeyskoye and Saki, having approached the state border of Ukraine and the line of contact," the Ukrainian Air Force said.