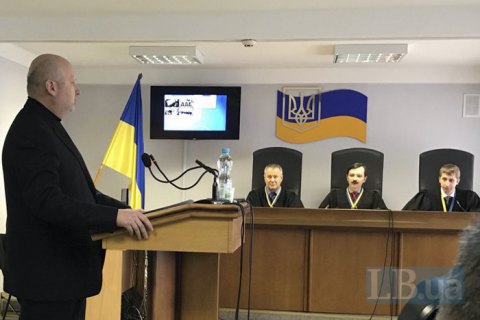 Having learnt about the seizure of the Crimean parliament on 27 February 2014, then acting President Oleksandr Turchynov immediately ordered the Internal Troops' command based on the peninsula to encircle the building in order to unblock it. However, the Internal Troops carried out his order only partially (they surrounded the building) because they were aggressive people close to them. Turchynov made this statement while testifying in court on the case of high treason by ex-President Viktor Yanukovych.

"At the first meeting of the National Security and Defence Council on February 28, Defence Minister Ihor Tenyukh reported that because of the dire state of the Armed Forces, it was only realistic to bring together about 5,000 combat-worthy military personnel. This was the entire reserve that we had then. The fact that the combat capacity of the Ukrainian army was destroyed is one of the main crimes of Yanukovych," Turchynov said.

"At that meeting of the National Security and Defence Council, we learnt that Russia's main goal was to invade mainland Ukraine. For this, they were ready to use up to 200,000 Russian troops, tanks, multiple launch rocket systems and aviation. I decided to move troops from the west of the country and other regions to defend the Kyiv, Donetsk and Kharkiv directions. A decision on mobilization was also made. It was to be implemented through the system of military commissariats, which, as it turned out, did not actually exist. Even some of their offices were sold," he said.

Turchynov went on: "In practice, the mobilisation did not begin until 17 March, when we were at least a little ready, in particular to hand out uniforms and arms. We needed to buy time, and the military, who remained faithful to the oath and held out for a month, gave us the opportunity to take up defence and thus foil the Russians' plan for a sudden and victorious invasion," Turchynov said.