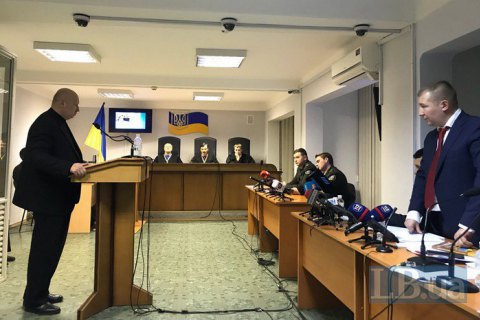 In February 2014, acting Ukrainian President Oleksandr Turchynov planned to introduce martial law but did not find political support for this decision. He made this statement while testifying in the case of Viktor Yanukovych's state treasury.

"On the evening of 27 [February – Ed.], I instructed the specialists of the presidential administration to prepare a decree on the introduction of martial law. At the NSDC [National Security and Defence Council] meeting on 28 [February], I was looking forward to receiving support from my colleagues because such a decree cannot work without the approval of parliament. I invited the faction leaders for consultations and suggested that they should support the initiative. Some of them feared that this decree would give me unlimited power. Therefore, I was the only one who voted in favour of introducing martial law in the country at the NSDC meeting," Turchynov said.

"I had to accept this. As long as Yanukovych was considered a legitimate president in Russia, there was a constant threat of Russia's invasion of Ukraine," Turchynov said. But the introduction of martial law would have helped the acting head of state "to calm the situation" when "when this separatist mayhem had already begun".

He said that when hostilities broke out in Donbas, he proposed a format of the antiterrorist operation (ATO) so that the presidential campaign, which was in full swing, could continue. He explained that the introduction of martial law would stop any election, strictly limit the constitutional rights of citizens, allow the authorities to confiscate property regardless of their ownership, but would not give the right to use weapons.

"A declaration of war gives the right to use weapons," Turchynov said. And this, he said, was impossible "because Russia is a nuclear power". "Ukraine does not have nuclear weapons, and international partners have assured us that they can support us only diplomatically," Turchynov recalled.