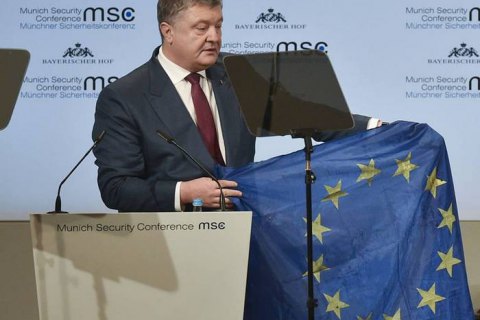 Ukrainian President Petro Poroshenko has pulled out an EU flag with a bullet hole from Donbas during his speech at the Munich Security Conference.

This flag is about all those who withstand Russian aggression and believe in a United Europe – our family," he said.

He expressed confidence that despite the challenges, Donbas may well become a successful example of the peaceful settlement of a violent conflict.

"Actually, not much is needed – just genuine implementation by Russia of the Minsk arrangements – our comprehensive peace plan," he said.