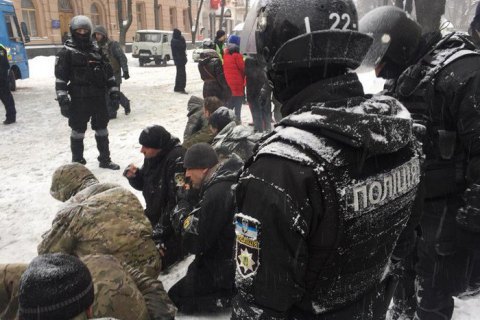 The Kyiv prosecutor's office has registered a criminal case on the possible abuse of authority by police officers who were mopping up the protest camp outside the Ukrainian parliament on the morning of 3 March.

A pre-trial investigation will be carried out by the Security Service of Ukraine (SBU).

The case was registered based on media reports on the police operation.

Prosecutor-General Yuriy Lutsenko expressed support for the police actions in the morning.

"Turning tent camps near central government offices into a holding tank of extremists, weapons and explosives is a taboo. The camp, where plans to seize parliament are being made on (tycoon Serhiy – Ed.) Kurchenko's money, from where attacks, including with the use of weapons, against the Interior Ministry staff regularly begin, should have been stopped. Therefore, the Prosecutor-General's Office supports the lawful actions of the Interior Ministry in the tent camp on 3 March. At the same time, prosecutors closely monitor the lawfulness of law enforcers' actions in respect of detainees," he said on Facebook.

One more case was opened over the obstruction of Radio Liberty photo correspondent Serhiy Nuzhnenko's work by police. It will also be investigated by the SBU.

Clashes broke out on the morning of 3 March when police entered the protest camp outside the Ukrainian parliament, which was set up there in October 2017. Police detained over 100 protesters, around a dozen protesters and seven police officers were injured.