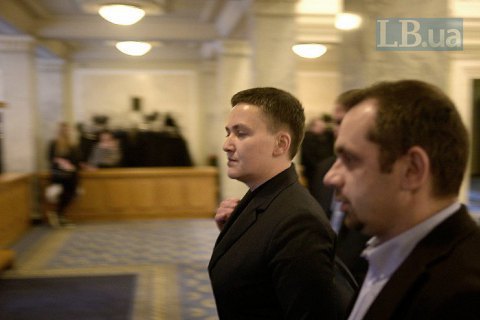 Prosecutor-General Yuriy Lutsenko has petitioned parliament to strip MP Nadiya Savchenko of immunity from prosecution so that she could be detained and arrested on suspicion of attempting to organize an "armed government overthrow by means of terror".Speaking from the parliament rostrum on the morning of 15 March, he said that Savchenko was planning to throw grenades at parliament boxes, fire a mortar at the glass-domed session hall and finish the survivors with an automatic rifle.

Later in the day, Savchenko said she generally approved of the idea of a military coup.

"I know that very many servicemen are hearing me now, who absolutely share my point of view that a military coup in Ukraine is quite expectable and possibly rather correct event," she said after she was questioned by the Security Service of Ukraine (SBU) in ex-negotiator Volodymyr Ruban's case.

After the questioning at the SBU, Savchenko returned to parliament where, according to several MPs from the People's Front, she was spotted carrying "several grenades and a pistol".

She was led out of the session hall by several MPs.

Later, Savchenko admitted carrying a pistol which she said she had been awarded by speaker Andriy Parubiy upon her release from Russian captivity.

"I have the right to carry this weapon as an officer. I know where and when to wear it… I can say that I saw fear in their [MPs'] eyes for the first time," she said on the parliament sidelines, according to an LB.ua correspondent.

She refused to show the contents of her bag to journalists.