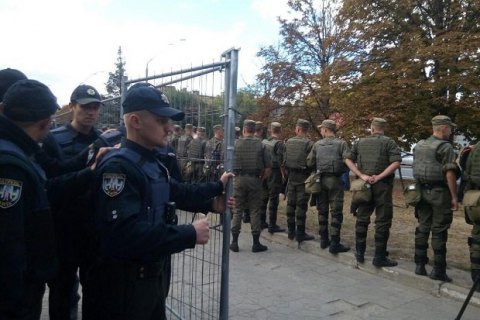 The Interior Ministry of Ukraine said that under the security regulations planned for Russian diplomatic offices in Kyiv, Kharkiv, Odesa and Lviv, Russian nationals will not be able to cast their ballots there because they will have no access to the facilities.

The Interior Ministry quoted the Ukrainian Foreign Ministry's statement of 21 February which says that voting in the Russian presidential election in Russian diplomatic and consular offices in Ukraine can be held only on condition that no election is held in occupied Crimea and Sevastopol.

"The Russian Federation has not dropped its illegal intentions. Therefore the Ukrainian Interior Ministry decided that elections violating the law of Ukraine should not be held in Ukraine on the territory of diplomatic missions," the Interior Ministry said.

It added that "to prevent provocations and possible difficult consequences, the National Police and the National Guard would ensure security of all diplomatic offices and adjacent territories in accordance the Vienna Convention".

"Only persons with diplomatic status will have access to the establishments. Other persons and Russian citizens will not be allowed to enter the territory of diplomatic offices," the Interior Ministry said.

Earlier, the Russian embassy said that four polling stations would be opened in Kyiv, Lviv, Kharkiv and Odesa for the presidential election on 18 March.

President Petro Poroshenko said that Ukraine would introduce sanctions against those who organized the Russian presidential election in Crimea.