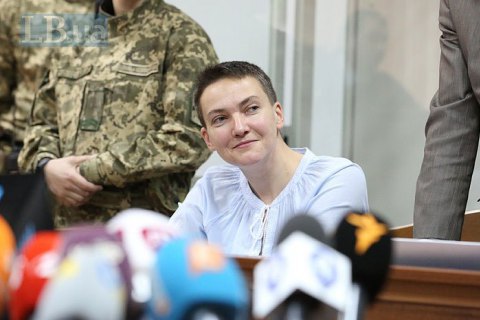 A polygraph test has confirmed that Ukrainian MP Nadiya Savchenko was plotting terrorist attacks in Kyiv's government quarter and in the parliament building, according to the website of the Security Service of Ukraine (SBU).

The test showed that Savchenko was involved in preparing an armed seizure of power. For this, she was looking for and transporting weapons. She discussed plans for a violent overthrow of the constitutional system and the seizure of state power with the head of Officers Corps NGO Volodymyr Ruban and the leadership of the self-proclaimed Donetsk People's Republic.

At the same time, the experts did not find any positive psychophysiological reactions to the questions asked by the defence: whether Savchenko wanted to change power in Ukraine in a constitutional way, whether she thinks that the president, MPs, the prime minister, the secretary of the National Security and Defence Council, members The Cabinet of Ministers, the leaders of political parties are engaged in criminal activities.

It is also noted that due to Savchenko's conscious resistance to the polygraph test, the expert commission failed to ask all the prepared questions and the test was aborted.

The test was carried out by the Kyiv Forensic Research Institute.

MP Nadiya Savchenko was stripped of immunity from prosecution on 22 March. The next day she was declared a suspect and detained on charges of plotting a violent seizure of power and terrorist acts.