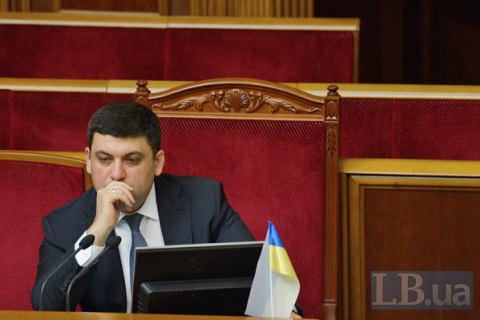 The propresidential Petro Poroshenko Bloc (PPB) faction does not rule out that the head of the Cabinet of Ministers, Volodymyr Groysman, will stay in his role in the acting status by the autumn, a source in the faction has told LB.ua.

"At the moment, it looks like we are going to have the minimum necessary number of 226 votes in favour of the law on the anticorruption court, taking into account the requirements of the Venice Commission, but the situation changes every day. Yesterday we discussed it at the meeting of the PPB faction that we are all waiting for the president to return to the country. Apparently, on Wednesday or Thursday he is expecting a call from the head of the US Department of State. The issue of voting for the law on the anticorruption court will be finally resolved then, "he said.

The MP said that "the PPB faction is split in half regarding Prime Minister Groysman's resignation if the law on the anticorruption court fails".

"Half of us supports his resignation, the second part does not. However, Groysman's resignation will not happen without the votes of the People's Front. Therefore, everyone understands that even if the prime minister submits a resignation letter, there is unlikely to be enough votes in favour of his dismissal. One cannot rule out that the prime minister will remain in the acting status until the autumn, albeit with fewer powers," he said.

"Groysman will certainly submit a resignation letter if parliament fails to pass the law on the anticorruption court on Thursday".

On 4 June, Groysman said that he would step down if parliament fails to pass the law on the anticorruption court.