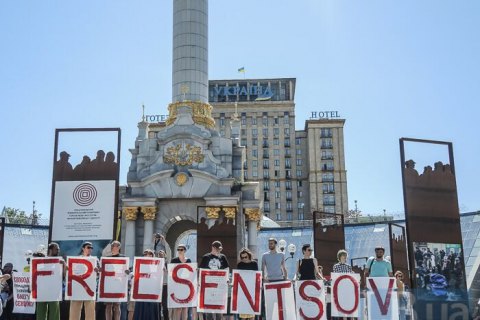 A rally in support of Ukrainian film director Oleh Sentsov and other political prisoners held by Russia has taken place in central Kyiv, according to an LB.ua correspondent.

Several hundred people have gathered outside in Kyiv's Independence Square.

Participants were encouraged to bring posters and whistles. According to the organizers of the event, on 2 June, "Kyiv was to show a red card to Putin's regime" while participants will list the political prisoners illegally held in Russia and annexed Crimea by name. Among the prisoners are artists, journalists, rights activists, students and Crimean Tatars.

Similar events were also held in Ivano-Frankivsk and Dnipro.

The US embassy in Kyiv said that it was planning to join the campaign. Rallies in support of Ukrainian political prisoners in Russia were also planned to be held in London's Downing Street and in front of the White House in Washington.