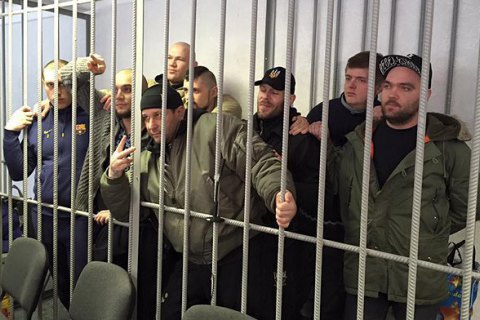 Law enforces had to take special measures after a number of fighters from the Tornado battalion ran riot there, according to the Insider website.

Early reports say law enforcers wanted to place ex-commander Ruslan Onishchenko and his colleagues in separate rooms. The inmates responded by barricading the exit from the cell and put up resistance to police.

The State Penitentiary Service sent in the riot police, which blocked the approaches to the remand centre. Activists, who protested against the separation of the Tornado members, gathered outside the remand centre. There was also a group of supporters inside the building.

A leaked video shows other inmates join the Tornado group. They are armed with hammers and knives.

Three paddy wagons left the territory of the remand centre at around 4.15 p.m. Tornado's supporters failed to stop them.

According to later reports, as a result of riots which broke out in the remand centre, one staff member was injured. Small arms and explosive packages were used, the spokesman for the deputy justice minister in charge of the penitentiary system, Yuriy Maslak, told Ukrainian News.

He said that the conflict broke out because the Tornado members were unhappy about a search and barricaded themselves in the cell. The search was carried out after the administration received a complaint about their alleged involvement in extortion of money from other inmates.

They also splashed a remand centre staff member with petrol and threatened to set him on fire.

Riot police and the Security Service of Ukraine had to storm the cell. As a result, three Tornado members were moved to other remand centres in Kyiv Region and four others were placed in a disciplinary cell in the Lukyanivka remand centre.

In April 2017, Kyiv's Obolonskyy district court sentenced eight former members of the Tornado police company to a prison term of eight to 11 years, five others to a probation term of five years.

They were found guilty on counts of abduction, car theft, torture, sodomy, breaking-in and other crimes. However, they were cleared of charges of organizing a crime ring.

Eleven out of 12 convicts appealed their verdicts.

One of the Tornado members, who was sentenced to 9.5 years in prison, was given an additional prison term after he beat an inmate to death.