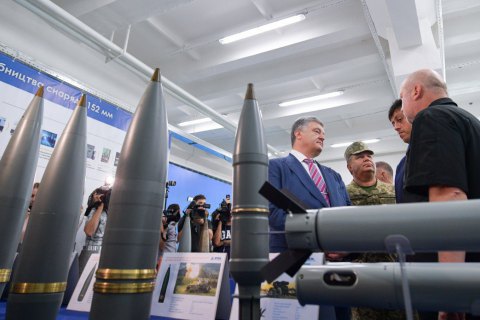 Ukrainian President Petro Poroshenko has said he is confident that Ukraine will begin serial production of large-calibre artillery ammunition in the near future.

"Today we are ready to move to the serial production of the most scarce ammunition in the near future," Poroshenko said during the launch of a new site for the production of 152-mm artillery shells at the joint-stock holding company Artem in Kyiv on Thursday.

He said that the Ukrainian Defence Ministry had drafted at his request a target programme for the new production of artillery munitions.

He noted that this is impossible without new equipment, which was not sold to Ukraine in 2013, despite the diplomatic efforts of the leadership of the country and the Foreign Ministry.

"I can state that confidence in Ukraine was so low, that the previous Ukrainian authorities were so uncompromising that nobody trusted us and nobody supplied the equipment," Poroshenko said.

He said that new equipment had currently been installed at the Artem plant.

"The newest machines [...] came from Turkey and are already operating. The newest machines arrived. I will not say which countries they came from, because there are conditions of confidentiality, but I can say that many countries of the world today supply the unique equipment that is used by employees of the Ukrainian defence industry," Poroshenko said.

He drew attention to the fact that the seized $1.5bn, which was stolen from the Ukrainian people by the previous government, was working for Ukraine. He recalled that part of these funds had been spent on the country's defence industry, and "these funds were used to ensure the creation of a complex for the production of ammunition, both artillery and reactive ammunition."

The head of state also noted that artillery had ensured a reliable defence of Ukrainian lands over the past four years of the war.