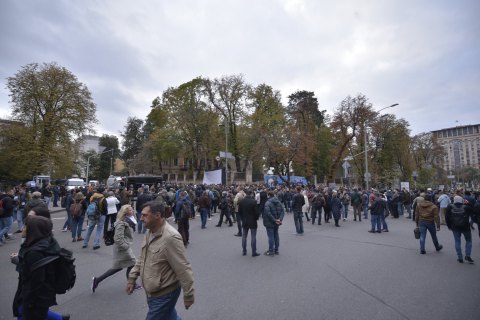 Around 500 have joined the "Silence Kills" event not far from the presidential administration in Kyiv on the evening of 27 September to demand action on the attacks on public activists, which became increasingly more frequent.

Traffic in the area is limited, police are checking the participants with metal detectors.

Activists of the Automaydan movement called on the participants to "visit" Interior Minister Arsen Avakov, according to an LB.ua correspondent.

One of the demands of the rally is an urgent public report in parliament by the interior minister on the attack cases.

The "Silence Kills" event is being held tonight in Kyiv and several other cities of Ukraine. Its participants are picketing local authorities, demanding the attacks on activists be investigated and their perpetrators punished.