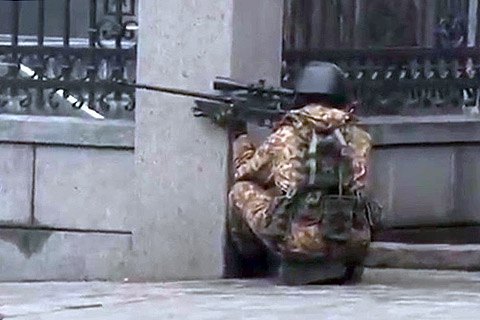 Law enforcers have detained a sniper of the National Guard on suspicion of killing Euromaydan activists in Kyiv's Instytutska Street on 20 February 2014, the Ukrainian News agency has quoted a source in law enforcement as saying.

He was detained in late October. In early November, he was arrested for 60 days. His name is not disclosed for reasons of investigation.

Investigators established that the suspect shot at a Euromaydan activist, theatre director Oleksandr Khrapachenko, who was in a crowd of other people in Instytutska Street, at 11.28 on 20 February 2014. Khrapachenko succumbed to wounds.

It was a sniper of the Omega group deployed at the time in the Cabinet of Ministers club. On 31 October this year, following tests and investigation, the sniper, who is on active duty with the National Guard, was detained at home.