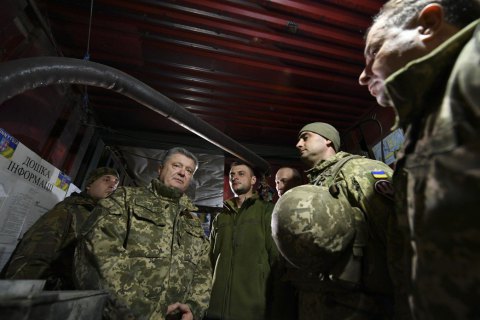 Ukrainian President Petro Poroshenko has called on law enforcers to investigate recent media reports about cases of corruption in the defence industry, including leaked information from law-enforcement agencies because this case has been investigated for several years.

A statement to this effect was published by the president's press service.

"My principled position as president - I want to address the law- enforcement agencies, the Prosecutor-General's Office, the National Anticorruption Bureau of Ukraine and the Special Anticorruption Prosecutor's Office - if there are facts, neither surnames, nor posts will protect anyone […] If there are facts - to the prison. No facts - stop destabilizing the situation both in the army and in the state," he said.

Poroshenko added: "Today, politicians have flocked as vultures, including the politicians directly involved in plundering, sale and destruction of the army. Or corrupt officials who have already pissed everyone off. Let them see and ask us in what condition we accepted the army back in 2014, or rather the absence of the army."

On 25 February, the Bihus.Info investigative journalism project published results of its investigation, according to which Ihor Hladkovskyy, the son of the first deputy secretary of the National Security and Defence Council, Oleh Hladkovskyy, together with Vitaliy Zhukov and Andriy Rohoza allegedly bought smuggled Russian military hardware parts and resold them through straw companies to defence companies. Also, they allegedly sold overpriced parts to Ukrainian military units. Journalists claim that the three had embezzled at least 250m hryvnyas.