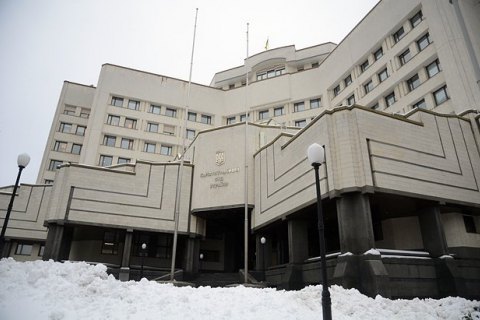 The Constitutional Court of Ukraine has concluded that making officials criminally liable for illegal enrichment runs against the constitution, one of its judges has said.

"The decision on this constitutional motion was taken today," he said.

He explained that on 26 February, the court considered a constitutional motion filed by 59 MPs who challenged Article 368-2 of the Criminal Code on illegal enrichment.

Thus, the court upheld the motion and ruled this article unconstitutional.

The Constitutional Court's rulings are final and may not be appealed.

The motion filed in December 2017 was initiated by People's Front Pavlo Pynzenyk. Co-sponsors also included MPs Maksym Polyakov and Yevhen Deydey of the People's Front who are suspected of illegal enrichment and illegal profits.

According to UNIAN, introducing criminal liability for illegal enrichment was one of the EU requirements for the implementation of the visa liberalization action plan, as well as one of Ukraine's obligations to the IMF, included in the Memorandum.

The National Anticorruption Bureau is investigating 50 cases under Article 368-2. The most severe punishment envisaged is five to 10 years in prison, with deprivation of the right to hold certain posts or engage in certain activities for up to three years with confiscation of property.