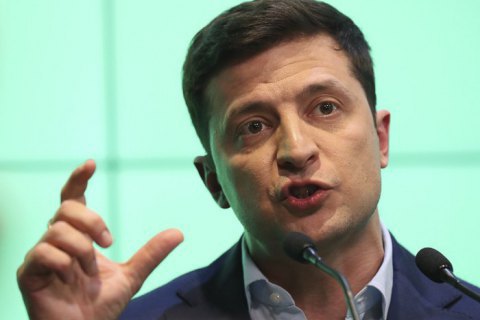 President-elect Volodymyr Zelenskyy has said that Ukraine and Russia only have a shared border in common.

He said this on Facebook in response to Russian President Vladimir Putin's remark about a single people of Ukrainians and Russians.

“I’ve been thinking a lot about "a lot in common" between Ukraine and Russia. The reality is that today, after the annexation of Crimea and the aggression in Donbas, there’s only one thing in common left, which is the state border. Common 2,295 km and 400 m," Zelenskyy said.

He suggested that after Ukraine restores control over the entire border, it will be possible to search for more things "in common".

“A ban on the export of oil products, the opening of passport issuance centres for residents of the occupied territories, the holding of Ukrainians in captivity do not bring anyone closer to settling relations between our countries. And such relations cannot be called "fraternal",” Zelenskyy said.

Zelenskyy also commented on the Russian NTV channel's decision to show his old show which he used to present.

“I want to remind you that it was participation in the TV show which made me popular in Ukraine and eventually helped me become the president-elect of Ukraine. The airing of this show, which was filmed many years ago, in my opinion, looks strange - I have no ambitions to make a political career in Russia," he said.

On 29 April, Putin once again called Ukrainians and Russians one people and declared the need for common citizenship.