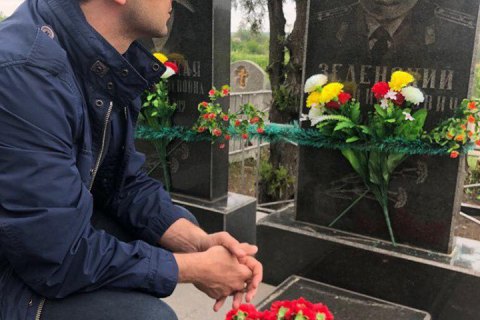 President-elect Voldymyr Zelenskyy has come to his hometown of Kryvyy Rih to visit the grave of his grandfather who fought in World War II.

"Today I am at the grave of my grandfather Semen Ivanovych Zelenskyy. He fought in the war and remained forever in my memory one of those heroes who defended Ukraine from the Nazis. It’s a pity that we so rarely remember veterans, our grandparents. We should be grateful to them every day. Today is 9 May. This is our Thanksgiving Day. Thanks for the fact that the inhuman ideology of Nazism is gone for good. Thanks to those who fought against Nazism and won. Just thanks to everyone for the opportunity to be born and live," he said on Facebook.

He noted that this war affected every Ukrainian family and that Ukrainians made a huge contribution to the victory.

"The Ukrainian contribution to the victory is huge. No-one has the right to privatise this victory, to say that it could have happened without Ukrainians. We remember those who died. And we honour those who are still alive - very few of them are still there. Happy Day of Victory over Nazism!" Zelenskyy added.