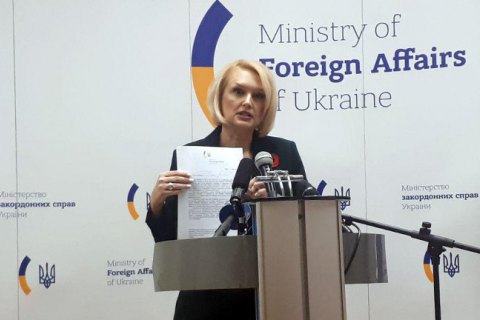 Foreign Minister Pavlo Klimkin has officially addressed foreign countries with a request to strengthen sanctions against Russia in connection with its decision to simplify citizenship regulations for residents of the occupied territories of Donbas, the speaker for the Foreign Ministry, Kateryna Zelenko, has said at a briefing, according to an LB.ua correspondent.

"Foreign Minister Pavlo Klimkin has sent a letter to the heads of foreign ministries of the EU, NATO, G7 and other partner states," Zelenko said.

The letter outlines Ukraine's structured position on the issuance of passports and associated security threats, including with reference to similar precedents in other states.

"The key point is that it is with this letter that Ukraine officially is calling on NATO member states and other partners to expand the sanctions list of international counteraction to the Russian aggression by including a passport case in it," she explained.

She also expressed hope that the international community will not recognise such passports.

At a meeting today, the Cabinet of Ministers of Ukraine initiated the introduction of personal sanctions against Russian citizens involved in organising the illegal issuance of passports to Ukrainians in the occupied territories. In addition, Donbas residents who received Russian passports will not be able to receive pensions and other social benefits in Ukraine.