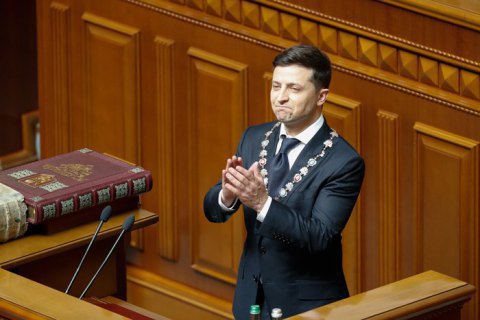 President Volodymyr Zelenskyy has disbanded the Ukrainian parliament of the eighth convocation and scheduled a snap election for 21 July, according to his decree No 303/2019 issued on 21 May.

It says parliament is being dissolved over the absence of a coalition for over one month (Article 90 Part 1 Para 1 of the Constitution of Ukraine).

The Cabinet of Ministers is instructed to ensure funding necessary for the election.

A snap election campaign begins the next day after the president's decree scheduling an election is published.

The European Ukraine coalition formed in 2014 consisted of the Petro Poroshenko Bloc, the People's Front, the Radical Party, Self-Reliance (Self-Help) and Fatherland. The latter three factions left it in 2015-2016. Afterwards, the majority had fewer than 226 MPs.

The coalition had not been declared failed until 17 May 2019 when the People's Front faction left it.

The regular parliamentary election was to be held on 27 October 2019.