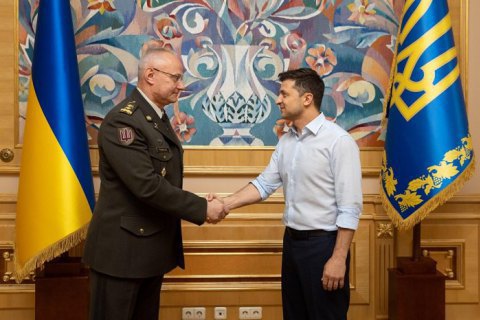 President Volodymyr Zelenskyy has issued a decree (No 302/2019) to appoint Lt-Gen Ruslan Khomchak chief of the General Staff and Commander in Chief of the Armed Forces of Ukraine.

With another decree (No 301/2019), he dismissed Viktor Muzhenko from this post.

Lt-Gen Khomchak has been the first deputy chief of the Ground Troops since 2016 in charge of the South Operative Command.

He took part in combat actions in Donbas.

Khomchak was in charge of the failed Ilovaysk operation in August 2014. The parliamentary investigation commission established that he had personally issued an order to Ukrainian servicemen to leave Ilovaysk.

The failed Ilovaysk operation, in which Russian regular troops encircled some Ukrainian units and later gunned them down during the purportedly agreed withdrawal, became a turning point in the Ukrainian government's efforts to restore control over Donbas. The Ukrainian army lost initiative and had to go on the defensive. Heavy losses pushed the Ukrainian authorities into reaching the so-called OSCE-facilitated Minsk ceasefire agreements.