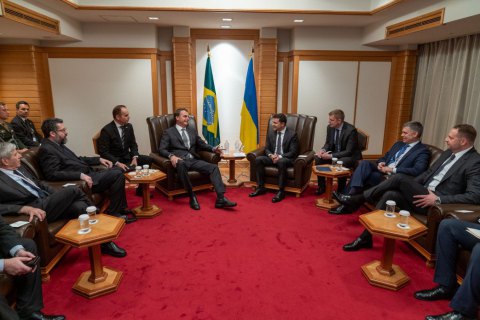 Volodymyr Zelenskyy and Jair Balsonaro, the presidents of Ukraine and Brazil respectively, have discussed the relaunch of a joint space project.

According to the Ukrainian president's website, they met in Tokyo where they attended the enthronement of the Japanese emperor.

"Ukrainian President Volodymyr Zelenskyy discussed a number of economic issues and initiatives with his Brazilian counterpart Jair Bolsonaro during a working visit to Japan... During the meeting, they also discussed prospects for cooperation in the space industry. The Ukrainian side proposed to restart a joint space project using the Alcantara cosmodrome," the website said.

In 2003, Ukraine and Brazil entered into an agreement on long-term cooperation on the project for the construction of the Alcantara cosmodrome located on the Atlantic coast. The Brazilians were to create the infrastructure of the launch complex. In turn, Ukraine pledged to develop a new launch vehicle for the spaceport, as well as new generation satellites.

The first launch of the Ukrainian Cyclone-4 launch vehicle was planned for the end of 2014 but it did not take place.

On 16 July 2016, the Ukrainian-Brazilian agreement on the Cyclone-4 project signed in 2003 expired. During the conversation, the parties noted mutual interest in expanding trade.

"Brazil is our main trading partner in Latin America. I welcome the expansion of the presence of Brazilian companies in Ukraine and Ukrainian companies in Brazil... We are planning large-scale privatization, we are presenting a lot of projects that show that it is profitable to invest in Ukraine," Zelenskyy said.

Bolsonaro invited Zelenskyy to Brazil and accepted an invitation to visit Ukraine in 2020.