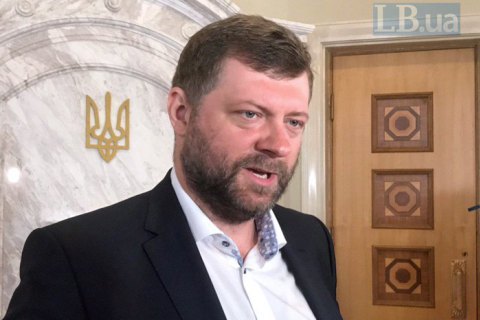 Servant of the People MP Yevhen Shevchenko, who took part in the Russian propaganda show "Big Game" on pro-Kremlin Channel One, will not be stripped of his MP mandate, the first deputy head of the faction, Oleksandr Korniyenko, has said, according to an LB.ua correspondent.

"I got a call from this TV and this programme. I turned down their offer. This is my position. I never talk to Russian state-owned-channels unlike perhaps the commercial ones… Was there a faction ban not to talk to one or another channel? No, there was no such decision," he said.

He added though that the faction had advised Shevchenko against talking to this TV channel.

"There was a recommendation that MP Yevhen Shevchenko should not talk to this TV channel," he said. "This is all propaganda. Whatever he said there would be twisted."

Asked about possible sanctions against the MP, Korniyenko said that the faction would decide on the matter on Monday.

"The faction cannot strip an MP of his mandate. This is up to court," he said.

Shevchenko, who was elected to parliament from constituency No 76 in Zaporizhzhya Region, took part in the Russian propaganda TV talk show "Big Game". In his speech, he repeated some of Russian President Vladimir Putin's remarks about "nationalists" preventing a peaceful settlement of the Donbas conflict. He also talked about the so-called "Steinmeier's formula" for Donbas and the need for the presidents to meet in the Normandy Four group.

Shevchenko posted the video of his speech on Facebook but later deleted it because of the wave of criticism. At least two of his party colleagues criticized his decision in Facebook comments.