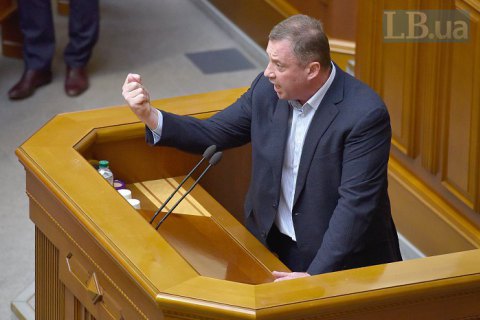 The Ukrainian parliament has agreed to prosecute, detain and arrest MP Yaroslav Dubnevych, a member of the For the Future group.

Prosecutor-General Ruslan Ryaboshapka told MPs that the investigation into the criminal case regarding Dubnevych's possible involvement in the seizure of funds belonging to Ukrzaliznytsya (Ukrainian Railway) had been completed.

The defendants in the criminal proceedings are eight people, including MP Dubnevych, who are now familiarizing themselves with the case files. The case will then be brought to court.

"This proceeding has been investigated for almost three years. The investigation is over. There is enough evidence to bring [MP Dubnevych] to account," he said.

According to Ryaboshapka, Dubnevych, as chairman of the parliamentary committee on transport, "constantly studied and analysed the financial condition of Ukrzaliznytsya, and also informed Ukrzaliznytsya officials about the need to carry out respective procurement and works."

As a result, products were purchased at inflated prices from an enterprise owned by Dubnevych himself.

According to investigators, these actions inflicted losses of 93.277m hryvnyas on the state.